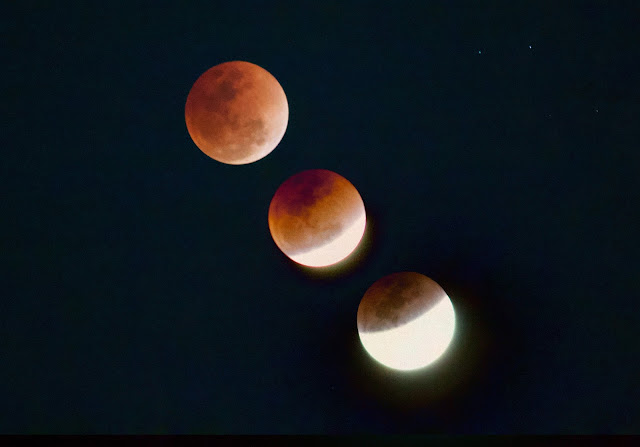 There was a very rare astronomical event on this 31st Jan. It moon was at the closest position relative to earth on this full moon day. Hence Super Moon. It was also the second full moon of the month, so it was also a Blue Moon. Remember the saying "Once in a blue moon"? It means "rare" event. Obviously having two full moons in a month is rare. Usually, they occur on the very first and last day of the month as there is always a gap of a month between them. So it was 1st and 31st Jan. Now the Blood Moon meant the moon was going to turn Blood Red for some time. It happened during total lunar eclipse when Moon does not get any direct sunlight (due to earth's shadow falling on it) but it gets the light refracted from earth's atmosphere (mostly from the limbs) which turns moon red.

In the past, I had seen a lot of eclipse montages where people stitch various stage of eclipsed Sun or Moon into a single photo. I tried the same this time as well. Used an 18-55 Canon lens to capture a series of photos starting from the totality of lunar eclipse (because by the time moon rose and visible that evening it had already reached totality) to the end of the eclipse. I was not sure what was the right interval of clicking photos so I set a very frequent interval of 1 minutes. Used the intervalometer of magic lantern firmware in my Canon 600 (T3i). I realized 1 minute was too short of an interval. So I took every 3rd photo which resulted in clearly separated moons in the composite. Finally used GIMP to mask the moon in all the layers except the 1st shot which had the ground. 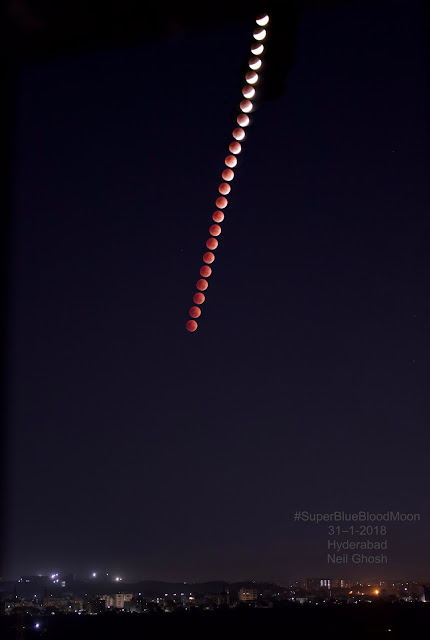 I captured all the photos in RAW mode so that I could control the exposure in a better way so all photos needed to be converted to JPEG before I could import them into GIMP. I  found a utility in Mac to batch convert RAW to jpeg. So following command, every converts every 3rd RAW images  IMG_0692.CR2 onwards which are in sequence