The word “Android” had been buzzing since quite a while now. However I realized the power and beauty of it only when I saw my friend’s Google Nexus one phone (Not sure why they stopped it, probably it was just for Demo :D ) and finally ended up buying an entry level Android phone , HTC Tattoo for experimenting. It has been a couple of weeks I began writing Android apps code for Hello World and finally got an idea of the programming framework after writing a simple app. 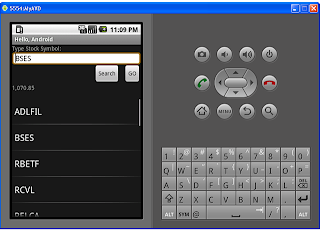 I also started following Android developer blog in my Google reader
I started with Hello World Example in official Android developer’s website. It was quite easy with the Eclipse plug-in. Then I went on to explore the Layouts and UI elements.It has a similarity with Adobe Flex programming that we can create fixed UI objects in main.xml like we do in .mxml file in Flex. Also we can create these elements dynamically in program code (Java) like we do in Action Script in case of flex programming. Finally I ran the app in emulator and when it ran successfully, in no time I exported the app in .APK file and  transferred it to my Phone using QR code generator, installed and tested.  You can scan the QR code in the left using the bar code reader app of your android phone to input the URL of the app file to the phone. For installing, of course I had to change phone setting to allow non-market apps.
This app contains an input text box where you can type partial company name like “Reliance” or “TATA” and hit the “Search” button and it will pop up a list ticker symbols of all the companies listed in Indian stock exchanges with than name,  if your phone is connected to WI-FI , GPRS, EDGE or 3G. Then if you touch on any of the symbols in the list it will populate the text box with the same symbol. Now you can press the “Go” Button and after sometime it will fetch the current price of the Stock in INR and display below the text box. Email me at neil [AT] neilghosh  [DOT] com or comment bellow to get the Java source code.
My colleague Jake has been writing some good posts in his blog http://theappslab.com/ about android as well.