Iridium flares are sudden flares reflected from one of the Iridium satellite which looks like a very bright (as bright as -8 magnitude) moving object in the sky , sometimes brighter than Venus (max magnitude - 4.7 ) . The satellite itself is very faint in the sky (around 6 magnitude ) which almost beyond naked eye limit and since they are moving fast they can not be caught in long exposure. (because light doe not fall on a single spot in the camera sensor). I have been lately addicted to spot and capture this.

These are so bright during the flare that it can be easily seen even from the most light polluted sky. Here in this photo I could only see the bright stars. I could barely see a 2.8 mag star above 10 degree of southern horizon. Thanks to heavens-above.com and its Android app I could easily notified well before the flare and track it live just before its appearance so that I can have my camera's shutter open. 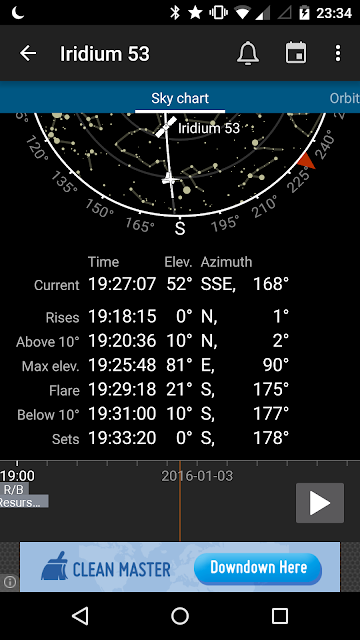 This particular time it was close to horizon during flare (about 21 degree) so I could get both the earth and sky. I have even captured this closer to horizon where its very difficult to see faint objects.


In both cases sun was well below horizon and it was evening. However I could not spot or capture this just during sunset despite being magnitude -6.7. It is claimed that these bright flares can be seen in the day time also but I think I did not look at the precise part of the sky due to lack of any star , may be it was just visible. I have got the video footage , probably I will play it over and over in my leisure to detect the bright moving spot.

Since the sky was not very dark and I had to take a long exposure (more than a minute) I had to reduce the aperture of the camera to F/8 so that not a lot of light comes inside over the period of time when shutter is open , I also minimized the ISO to 100 to make the censor less sensitive. Anyway I was shooting in RAW format so that I can play around the exposure and contrast later.

Since these are polar satellites , they rise in north and set in south. So all the attempts I have done till now are in the similar place of the sky. I intend to capture one in the middle of dark sky with wide angle and along with some recognizable celestial object e.g. planets and bright stars in coming days.