Amazon Echo was released in India last month and I bought one right away. I was actually waiting
for any of the voice assistants to be released, I would have personally wanted the Google Home to be released as I have been trying to build some Google assistant apps lately. Also Google kind of has all my personal data and it could just crunch and give me the right information in right time like Google now does in phones. I had recently successfully run Google Assitant and Amazon Alexa on a Raspberry Pi3 but the features there were very limited. The Echo Dot was very cheap and I had a spare Bose sound doc with Bluetooth receiver which I could connect to Echo Dot. Following is my impression after using it for a month 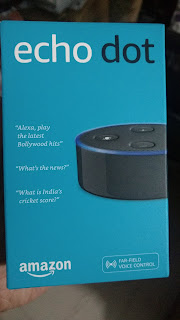 As you see I am mostly using it for radio and music, however, I am looking for ideas to build skills myself which can make things easier for me. Feel free share ideas in the comment :)