Like last year, JavaOne and Oracle Develop 2012 was organized and HICC on 3rd and 4th May 2012.The last time I attended such session was Tech Days when Oracle had just acquired Sun Miscrosystems. It was a two day program. This time the event was even larger. In fact all of the floors of HICC was full of sessions and hand on labs. There were even sessions in the 2nd floor and halls inside Novotel. 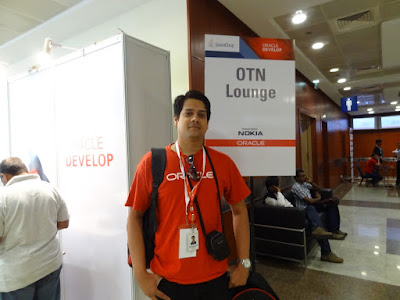 Day one started with Keynote from Nokia's  Gerad Rego after Naveen Asrani, Director of Product Management, Oracle kicked off the event. There was a big round of applause for Santosh Ostwal who spoke about his innovation on mobile controlled water pumps even with low cost Nokia phones. It was an remarkable achievement given the fact that be belonged to a poor farmer's family in a remote village.

Nandini Ramani presented the keynote for client technologies. Angela Caicedo talked about the scene builder for JavaFx and demonstrated the gesture controlled  duke. Anil Gaur spoke about the project Avatar which involved HTML5 as well. Dalibor Topic presented the project coin features in JDK7. David Holmes from presented the fork/join parallelism framework who later on gave a session on Project Lambda as well. Simon Ritter presented the keynote on JavaFx.The most interesting part was the demonstration of JavaFX on Raspberry Pi  Marcus Hirt  originally involved in creation of  JRockit virtual machine when they were students in their start up company Appeal Virtual Machines. It was very inspiring meeting him. He talked about HotRockit virtual machine which is coming up from Oracle.

In the evening the OTN night was quite entertaining with performances from standup comedian Vipul Goyal, Singer Vasundhara Das and top Indian Idol singer Meiyang Chang. 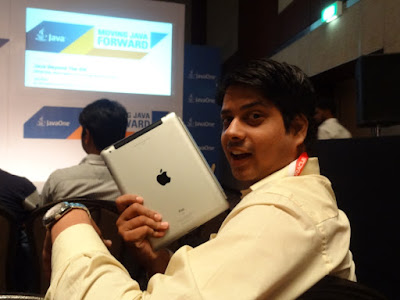 Day 2 began with panel discussion session with Arun Gupta, and other JavaFx experts. David Peake delivered the Oracle Develop keynote and stressed on Oracle Public Cloud. Next was probably the most interesting session of the event. Stephen Chin and Kevin Nelson discussed why HTML5 and JavaFx are not alternatives, they can be married together for low effort , rich web application leveraging the capabilities of both the technology. . More can be found at Steve's blog.

This was followed by yet another interesting session on JavaScript on JDK by Sundarajan. He talked about Nashorn. Jay Suri's session on "Java Beyond IDE" focused on the production time challenges in Java and  performance monitoring  with Flight Recorder. The final session I attended was by product  manager Dalibor Topic who explained the Java Community process and motivated to people to join.

Finally it was time for Glassfish and Friends party where all the Java experts from Oracle were present along with the local Java enthusiastic people. Arun Gupta motivated people to join the local JUG and contribute. It was pleasure meeting Marcus Hirt again and we discussed about various source control options while working on a Java project. During discussion Chuck Munn Lee said "I was tired yesterday and did some coding to refresh myself" this was one if the most motivational lines I ever heard. He is a master of client side technology. We also discussed about Ajax/Comet push technology and related server side framework.

Here are some pictures from my camera and if you do not want to get bored with the slide show here is the Video slideshow.