This time we the people living in the south Asian subcontinent were lucky to see total lunar eclipse. NASA has released a new video that shows how lunar eclipses work.This was the lunar eclipse with longest totality in the century. However I was not so lucky as cloud prevailed over Hyderabad sky for the whole night. I could find the exact timings in my time zone from WolframAlpha . However thanks to Google and Slooh I could watch it live online. Not only they had live feed in youtube with the expert commentary but also Google earth’s sky layer was showing the 3D like view of the eclipse live.You can watch the full recording here. I Managed to take some screenshots . The live commentary was very helpful , if you are new to astronomy. 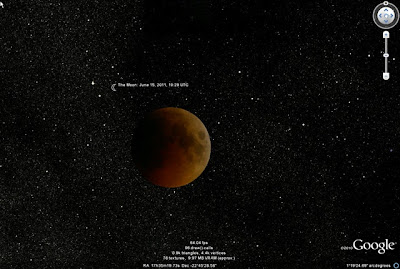 Following are few facts discussed during the eclipse.

One more interesting thing Google did was that they changed their logo (doodle) to a dynamic one which was showing the life picture of the moon during the eclipse and one could go back in the time using the scrollbar at the bottom and see the shape of the moon changing . Unfortunately it is not yet available in the doodle archives.

My Astronomer and Photographer friend Nikhil Tungare managed to find a small window of time when clouds were off the moon and could click some awesome picture of totality from his terrace. In fact he had reminded me of the eclipse a couple of days ago. Here is the Montage of the images . Photographed with 300mm f/2.8 on 5D Mark II from Hyderabad .

Here is another spectacular one by him. This photo and trails were taken by Ajay Talwar

The next total lunar eclipse is on 11th December this year.